The Displio is described by its creators as a “WiFi display that tracks what’s important to you.” It caught my eye as a Kickstarter campaign back in January 2015 as a neat, compact device for displaying custom data on my desktop. The delivery date slipped a few times but my Displio finally arrived in April 2016, about a year late. Not a huge deal, considering the complexity of manufacturing such a device and the fact that it is a “nice to have” and not a mission critical item. 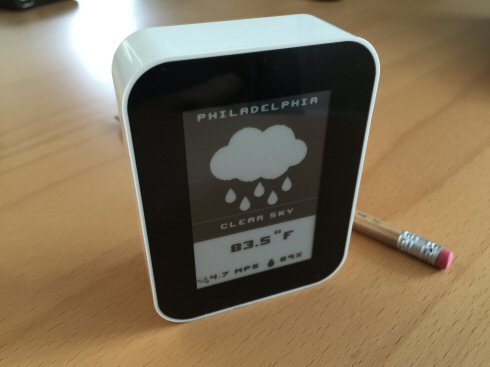 The hardware is exactly what was promised: a small plastic case, about 2.25 inches wide 3 inches high and a depth of about 1 inch, with an e-ink display. The back of the case has a micro USB connector for power and charging. There are no buttons on the Displio; all interactions are via tapping, shaking or rotating the device.

Upon receiving the device, I immediately set up an account and selected to display the weather widget. All administration is accomplished through a web page, and the Displio currently depends on the manufacturer’s servers, so if their cloud is down, the Displio performance will be degraded. Luckily, I have not noticed this as being an issue.

Since the display is monochrome e-ink, it uses very little power, so the expectation is that it will run a long time on its internal battery, untethered sitting on a desk or shelf. However, I was initially getting a few hours at best. I found that the default setting for my selected widget was to refresh “live.” (In other words, constantly) The expected battery life is listed under the refresh setting and changes interactively, so changing it to five minutes gave me an expected 15 days of life on a full charge, which seems pretty accurate. 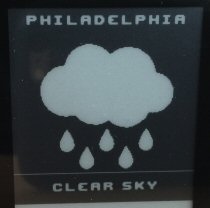 I’ve been using the weather widget for a few weeks to evaluate the performance of the Displio. Overall I’m pleased, but a few things are mildly annoying. The smaller text such as wind speed and humidity are fairly small and difficult to read, even up close. The humidity was stuck on 58% for a long time, and looked a lot like the word “SEX.” (More than one co-worker asked me why it says sex at the bottom.) For the last few weeks, regardless of the current weather, the widget displays a rain icon, which seems to indicate something is broken.

The real draw for me with this device was the ability to create my own widgets connected to my own data. Unfortunately, that is where the device has fallen short so far. A beautiful widget maker with a sleek UI has been teased on the Displio website for months, however it is nowhere to be found. The “developer documentation” link is also a dead end. I submitted a bug report through the site but never heard back. I did eventually receive a reply to a support email. I was told that documentation would be forthcoming, in addition to IOS and Android mobile apps. That was two months ago.

As it stands with the existing widgets, the Displio is certainly usable but not particularly ground breaking. The killer app (killer widget?) for this platform has yet to be made, and probably won’t until the fully functional developer tools are available. So I give the Displio a guarded thumbs up recommendation, hoping that the makers get the software finished and under control because the hardware is very good. (Note: As expected, the price has gone up since the “early bird” campaign on Kickstarter. It is a lot easier to recommend at $79 or $99. $140 seems a bit steep.)