My local Radio Shack closed on June 27, 2017 after 50 years in operation. This was my go to place for electronic parts and occasional electronics since 1988 and it will be greatly missed. Originally the store was listed as one that would remain open, but it was not to be. In addition to the store’s longevity, some of the staff had been there for almost 30 years. Even though the inside was relatively modern, you can see from this photo that the building was old and gave off a kind of “general store” vibe you don’t find very often in a national chain. 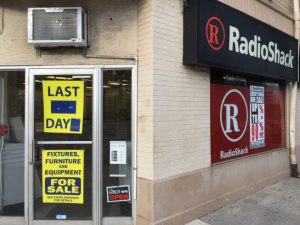 UPDATE: As of March 2018, the space has been restored to it’s pre-Radio Shack look and a cafe has moved in.