“HD Radio” is the technology by which US radio stations broadcast digital audio along with their regular analog signal. Standard FM radios only receive the analog signal and ignore the digital data. You need an HD Radio to listen to the digital audio. HD radios are most popular as features in newer automobiles, but adoption outside of car radios, as well as awareness by the public has been underwhelming.

The “HD” in HD Radio does not stand for “high definition.” In fact, Ibiquity, the company that developed (and trademarked the name) HD Radio, claims that HD doesn’t stand for anything. For us hobbyists that routinely use SDR (software defined radio) to look at the waveforms of broadcast radio, we have seen the HD Radio signals as two rectangular blocks of data alongside a station’s main signal. However, since HD Radio uses a proprietary protocol, we have not been able to decode or listen to this data.

On June 9, 2017, a cybersecurity startup based in Austin, TX named Theori, posted a full description of how HD Radio works along with their open source software implementation using a $25 RTL-SDR radio. (They utilize the official government name for HD Radio, “NRSC-5.”) Finally, we now know the mysterious encoding for this digital system, and it turns out that it is a slightly modified version of HE-AAC.

If you are looking for a fun project, you can use Theori’s code on GitHub to create your own NRSC-5 digital radio. I followed the instructions and with just a little extra troubleshooting, I was able to get it to work. Here is what the screen output looks like when you are successfully decoding NRSC-5 audio: 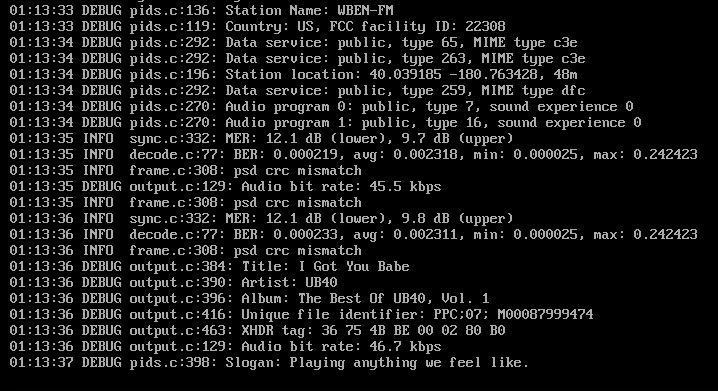 Here are some notes on my setup:

Good luck and I hope you enjoy the digital audio!

2 thoughts on “Listening to HD Radio with an SDR”