Since Septa is on the verge of introducing their new fare technology, Septa Key, to the Regional Rail system, I thought this would be a good opportunity to reminisce about one of their earlier automated fare systems. In the early 1990s, Septa provided orange refrigerator-sized ticket vending machines at most Regional Rail stations. I scoured the web for a picture of one of these hulking monstrosities with no luck. I therefore present a still from a video I shot in Suburban Station in the summer of 2001, which as far as I can tell is the only example of this unit on the web: 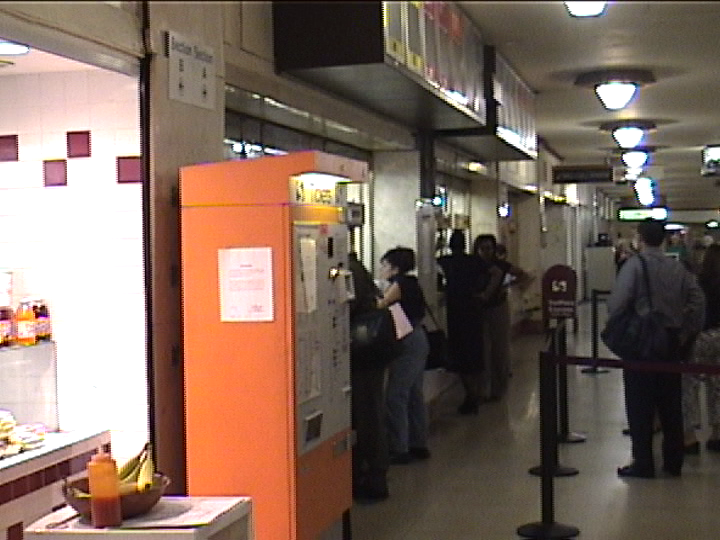 (Note that at that time, the ticket office was directly behind where it is now and facing the opposite direction (north.) You can also see the boxy CRT monitors overhead that displayed the train status. Yes, that is a bowl of bananas in the foreground.)

Outwardly it has the design sensibilities of something decades older, like a cigarette machine from 1960. The front had rows of illuminated buttons where you would choose your starting and ending zones from a large printed list. You would then press flashing “peak” or “off peak” buttons. I believe there was a very rudimentary monochrome two line LCD display as well. The unit accepted paper money, though many times with hesitation. Change was given in dollar coins. Tickets were printed on the standard size stub, but had a distinctive dot matrix look to them making it very obvious your ticket originated from one of these machines.

These devices were often out of order, and when they were a persistent “dinging” sound would emanate from them. Based on the sound of this ding, I suspect a Windows 3.1 computer was internally controlling the machine. When they were working, they were very convenient, especially if there was a line at the ticket counter. They were also great at stations when the ticket office was closed. (In fact, there was no penalty for an on board fare if the ticket office was closed except when a functioning ticket vending machine was present.) Citing their lack of ability to accept the new paper currency issued in the early 2000s, all of these machines were removed by 2007. At that time SEPTA told the Philadelphia Inquirer they were looking into offering computerized smart cards or some other system in two to three years…

I’m very hopeful that the new electronic fare system has all the conveniences of the old one along with the modern technology we take for granted today.