I’ve been using the new AT&T Nokia 920 phone for two weeks, so here are my thoughts:

CONs: No notification center, (although I hear that is coming eventually) lack of some key apps, many unappealing existing apps, random reboots reported by some users. (although I have never experienced one)

My two biggest gripes however are the lack of WAV file playback (WAV is a Microsoft format! My BlackBerry played WAV files!) and the fact that the battery and signal level indicators disappear after a few seconds instead of remaining visible. I’m hopeful that since these items could be easily fixed with a software update that they will be addressed in the near future. I also miss the “profiles” feature of my BlackBerry that allowed different email accounts to have different audible notifications.

The bottom line for me is that Windows Phone 8 suits my needs and integrates well with the Windows desktop, MS Office and Skydrive. I’m not a huge apps user but so far almost all the apps I need are available: Skype, Evernote, Facebook and Twitter among others. The lack of Instagram has been a deal breaker for a number of people, but I find the panaroma, self timer, and cinemagraph features to be much more useful and appealing than permanent image distortions. (I know, Instagram is a social tool too…) I’m also looking forward to developing my own apps on this platform, leveraging my existing knowledge of C#. Physically, it’s a large phone that I made even larger with a thick protective case, so now it is massive! This thing is like a lead monolith. I prefer the heft and feel of a solid phone, though. If you are in the market for a slim device, the 920 is probably not for you. 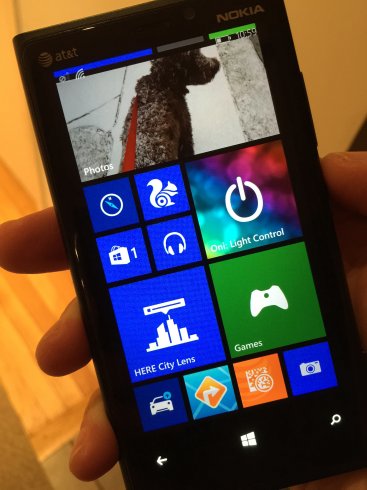