After a noble two year experiment, I decided to ditch my Nokia 920 Windows phone for an iPhone 6 Plus. It was not an easy decision and a lot of research was involved. There are plenty of reviews and specs online, so I will just get to the main points and summarize them here.

1. It’s all about the apps. Actually, most of the majors are here: Facebook, Twitter, Evernote. However, my thermostat, DVR, security system and others will never get ported to Windows Phone.

2. The update cycle is too long. It took seven months for the first update to appear, and that one was minor. It was almost two years to get from 8.0 to 8.1.

3. Lack of native remote desktop support. Unbelievably, Windows Phone 8 did not have RDP support but iOS does.

1. iOS is tightly controlled by one company, Apple. Some see this as a negative, but I like it because it prevents carriers from customizing the OS or worse, adding their own UI overlay.

2. iOS is more tightly integrated with the hardware since it is built by the same company. Overall, I believe this creates a better user experience.

Things I still miss about Windows Phone 8.1 even after three months

1. The live tiles. Everyone loves these and they are the best thing about Windows Phone.

2. The back button. It is a true OS back button that takes you to the last screen you were on, regardless of the app. Much better than having to click through the home button on iOS.

3. The auto fill typing is much better in Windows Phone than iOS. I was very surprised by this but the Windows version seemed scarily smart and almost always knew what I was trying to type. The iOS version is very hit or miss and does not seem to be getting any smarter. 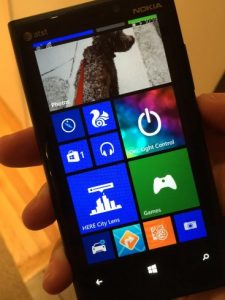