It seems like every electronics company from large to small is introducing a wearable device these days. As seen at CES 2015, it is all the rage to connect some kind of bodily sensor to the internet, pair it with an app and strap it to oneself. Most of these are fitness trackers that detect some combination of distance, speed, or heart rate. 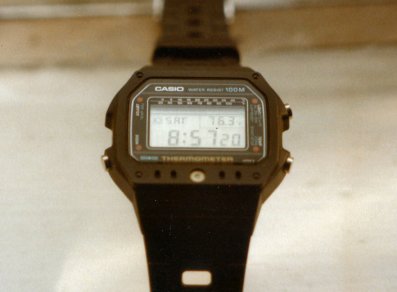 I started using wearable technology in 1983. That was the year I bought a Casio TS1000, the world’s first LCD digital watch with a built-in thermometer. Unfortunately, in those days such technology was seen as more nerdy than trendy. I recall lots of positive interest in this device from my 9th grade science teacher but not so much from my classmates.

The reason I consider this device a true wearable is because it was actually affected by the wearer’s body heat and had a special setting to compensate. So although it could not “take your temperature” it could tell you when you were relatively overheated. However, it was most useful for measuring the ambient temperature.

I was very disappointed when the case broke after a few years of use. By that time, I had moved on to the data bank variety of Casio watches, a distant relative of the modern smart watch.

Today I use a FitBit Flex and I may upgrade to the FitBit Charge HR later this year. I really like the simplicity of these devices and their companion app. However, neither will tell me the room temperature!